The RCC VR Lab is a resource that is available for members of the UNH community. The lab is run by members of the Research Computing Center (RCC), and is currently hosted in Morse 220, which also contains the offices of members of the RCC Software Group. Our goal in creating this lab is to reach out to researchers, educators, students, and other community members and find out how Virtual Reality technology can assist them in accomplishing their goals. Virtual Reality technology has managed to flourish In a relatively short period of time, and we are working to make sure that the University of New Hampshire community has the ability to stay at the front of new and innovative ways to explore research and educational experiences.

The RCC VR Lab has three Head Mounted Displays (HMDs), which were donated by a combination of the generosity of supporters of our (603) Challenge efforts and our friends at Connection. These include two Oculus Rift S HMDs and an Oculus Quest HMD. All of these units use state of the art "inside out tracking" and wireless Oculus Touch motion controllers to deliver an immersive virtual experience without the need for tracking sensors to be placed around the area where the units are used. 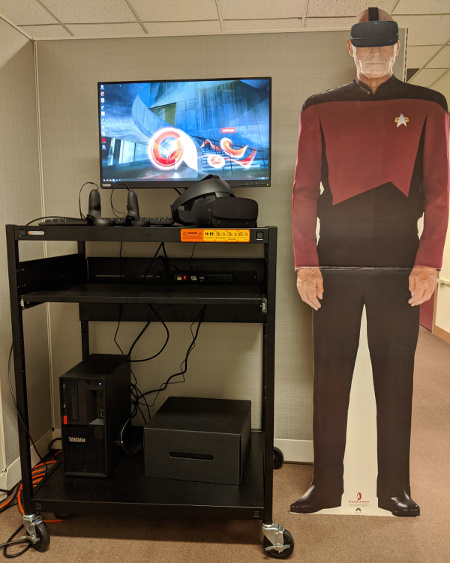 The Oculus Rift S units are wired solutions that are attached to Lenovo Thinkstation P330 desktop computers. They feature Windows 10 and high-end Nvidia RTX 2080 graphics cards that were donated through our partnership with Lenovo. These computers deliver the Oculus Rift S HMDs the power to maximize their efficiency in both computing and graphical fidelity. Both units are connected to mobile media carts.

The Oculus Quest is a new stand-alone HMD that requires no computer. The headset runs a modified version of the Android operating system to create a truly wireless experience. This headset sacrifices the power of having a desktop to do all of its computing for the freedom to go nearly anywhere. The Oculus Quest can be used in conference rooms or class rooms with nearly no setup involved.

What We Are Doing

We are making these Virtual Reality resources available to members of the community for exploration and experimentation. As software developers, we have been experimenting with different programming technologies that create VR scenes. The Unreal Engine allows it's users to create 3D scenes in a polished gaming engine that is used by many of the top video game companies to create their software. We have worked with the Unreal Engine, as it is available for use for no cost as long as the revenue brought in using the software remains at a modest level.

RCC has extensive expertise in web programming, and we have been working with A-Frame, which is a javascript framework that uses WebGL to interpret specialized HTML tags and create 3D scenes with them. These scenes can be embedded in web pages, which can be viewed in Virtual Reality using an HMD. One of the beauties of this technology is that it is not limited to VR and can be viewed in a regular web browser on a PC, or with the assistance of gyroscopes on your phone. Try it out in one of our demos!

What Can You Do?

Are you a researcher, professor, or student who:

We are happy to talk to you about VR, show you a demo, or help you start your next big project. Contact us here!